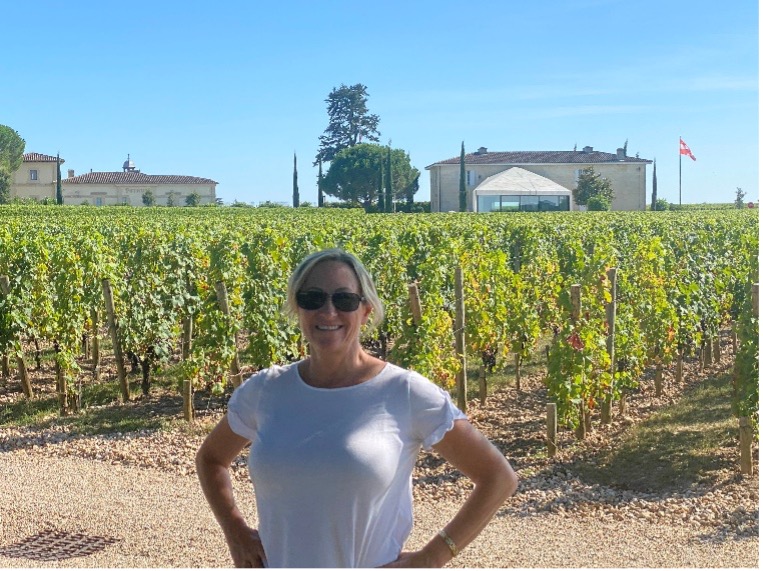 As many of my fellow LeaderShifters are, I’m a lifelong learner.

Besides the obvious topic of leadership, another subject I’m very passionate about is WINE! This should not be surprising to folks who are familiar with the SIP™ and PINOT™ acronyms I developed for teaching people about effective feedback as well as my playful workshop called “Uncork Great Performance: What Wine Can Teach Us About Effective Feedback.” On my recent trip to France, I got a first-hand, multi-sensory experience of the range of wines produced in the prolific Bordeaux region. With apologies to any of my followers who may be actual sommeliers, here are some of my musings and layperson learnings.

The Lay of the Land 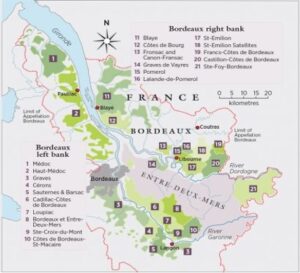 The region of Bordeaux is split in two by the Gironde Estuary, which divides into the Dordogne and Garonne rivers. I spent two full days in and around Saint Émilion and Pomerol, the two most well-known appellations in the right bank. One day was spent going château to château for pre-arranged tours and tastings (and of course, purchases to ship back to the U.S.!), and the more leisurely second day entailed riding scooters up from the city of Bordeaux for a picnic lunch of jambon, fromages, et baguettes in front of the one and only (but closed to the public) Château Pétrus in Pomerol! Saint Émilion has the longest history of wine production in Bordeaux, dating back to and named after a hermetic 8th century monk who lived in one of the area’s many limestone caves. 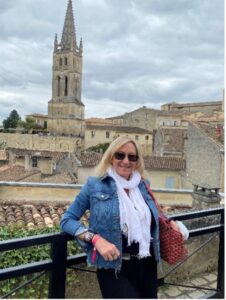 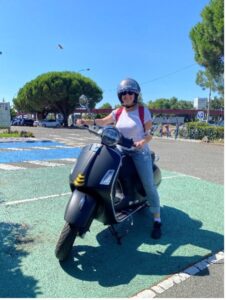 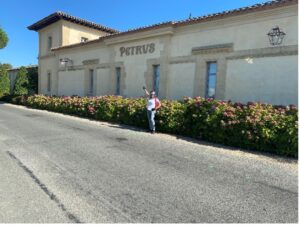 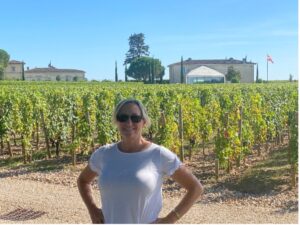 The best right bank terroirs have soils heavy in limestone along with clay, gravel, sand, and iron, and the top Saint Émilion wines generally come from the estates located on its famous limestone plateau. I already knew that relatively inhospitable soil like that I’ve just described is perfect for grapes, while not so much for cultivating most other agricultural products. It’s the lack of water at the right times that creates vine stress forcing the development of the fruit instead of leaves and canopies. This helps produce smaller berries with higher juice to skin ratios that ultimately create more concentrated, flavorful (read: valuable) wines.

I also spent a day touring and tasting in the prominent left bank area of Médoc, where the best terroirs are predominantly gravel-based. The gravel soil encourages the roots to crawl deep into the ground for nourishment (again, such stress is good for fruit quality), retains water to mitigate dry periods, and contributes nuanced minerality to the wine. As I’ll opine on shortly, Médoc produces some of the world’s most coveted wines.

While both breathtakingly beautiful and adorned with grape vines as far as the eye could see, the two areas felt quite different. Right bank vineyards are small in scale, with an average size of only 5 hectares. There are a few architectural stunners in the right bank, but generally speaking, family homes and smaller châteaux are the norm there. In contrast, the left bank showcases a greater number of massive estates and far larger vineyards with much greater production capacity. 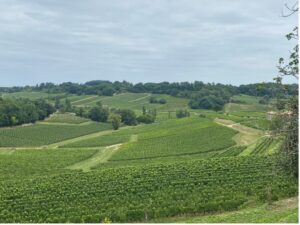 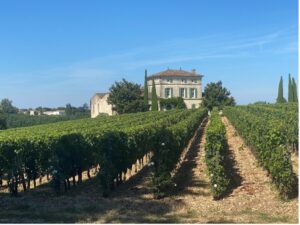 Bordeaux wines are almost exclusively blends, and there are only six permitted grapes: Merlot, Cabernet Franc, Cabernet Sauvignon, Petit Verdot, Malbec, and Carmenere. To put that in perspective, there are over 10,000 kinds of grapes in the world. Granted, many of those are table grapes, but there are easily a few dozen grape varieties used worldwide for wine production. The most notable exception to the Bordeaux blend convention is Château Pétrus, which has been 100% Merlot since 2010.

Merlot is the predominant grape grown in the right bank, and it’s blended with some combination of the other approved varieties. In contrast, left bank terroir favors Cabernet Sauvignon grapes, which are most often blended with some Merlot and, occasionally, small amounts of the other varietals. Specific blend percentages vary by vintner and may change slightly from year to year to emphasize a variety that fared particularly well in that vintage.

Blend ratios may also be different for a château’s prestigious “first label” than for other bottles produced, as winemakers generally select their highest quality grapes and barrels for first label wines. Second label (and sometimes third and beyond) wines are made from cuvee not selected for use in the first label or for any other reason a winery chooses. For example, in 2010, Premier Grand Cru Classé B Château Valandraud produced a 2,000-bottle run of Axelle de Valandraud with 100% Merlot sourced from its most exceptional grapes to commemorate the 10th birthday of their granddaughter. In contrast, their first label 2010 remained 85% Merlot and 15% Cab Franc with a production of 13,000 bottles. And yes, of course I bought some Axelle 😊.

Being only a month or so away from harvest, the grape bunches were robust when I was touring around. What a beautiful sight to behold! Due to some early season frost across the region that affected most crops, many producers are waiting to the last possible moment to pick the 2021 harvest. 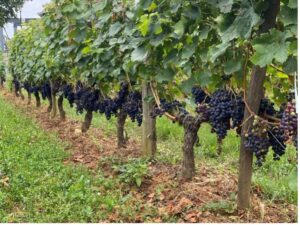 The Wines and Châteaux

While I already had some basic knowledge of the winemaking process, #mindblown by the details I learned on this trip. The ultimate characteristics of any Bordeaux wine are not only determined by the dominance of Merlot vs Cab Sauv in the blend, but also by the macro and micro weather patterns of any particular season, highly localized terroir, harvest timing, whether crushing and pressing take place before or along with fermentation, type of fermentation vessel, method and amount of clarification, barrel selection, length of time aging before bottling, and other seemingly minute decisions made by winemakers to give their wines a distinctive flair. #artandscience

One château I visited shared that among their unconventional choices is using 200% new French oak barrels for aging, meaning they transfer the wine from one new barrel to another new barrel during aging to impart even more distinctive oak and other flavors. This is also an expensive choice, as new French oak barrels cost anywhere from $800 to almost $4,000. Even the amount of toast a winemaker requests from the barrel maker affects the wine; new barrels with a light toast give vanilla and caramel notes, while a darker toast gives smokey, roasted aromas. 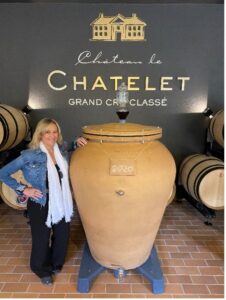 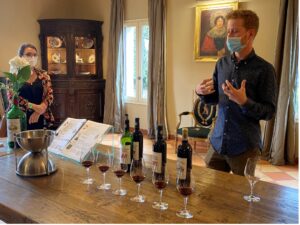 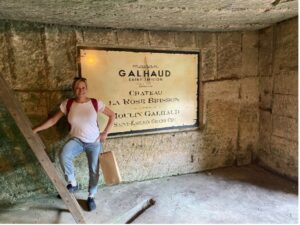 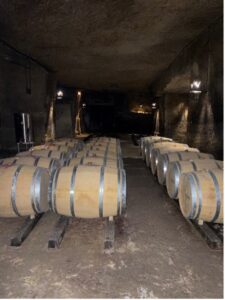 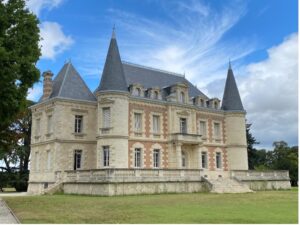 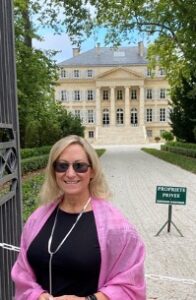 The way wines gain critical acclaim is also quite different between the left and right banks. The left bank uses the immutable 1855 Classification of the Médoc, originated by Napoleon for the Exposition Universelle de Paris. It’s a five-tier hierarchy, led by the five legendary and uber expensive “first growths”: Château Lafite Rothschild, Château Latour, Château Margaux, Château Haut-Brion, and Château Mouton Rothschild (elevated from second growth in 1973 as one of only two changes ever to the 1855 system!). Sadly, none of these châteaux were open for visitors, but I did take a photo in front of Margaux. The left bank is also the home of many Cru Bourgeois estates. Bourgeois doesn’t mean the wines are bad; rather, they just weren’t included in the 1855 Classification of Crus Classés. They are often of great quality and value for the money. #dontbeawinesnob

You see, the wine world was beset by controversy in July 2021 when Château Cheval Blanc and Château Ausone, the first two producers back in the day to receive the highly coveted Premier Grand Cru Classé A designation, announced they would not seek to renew their Classé A status for the 2022 review. The move is a protest against the evolution of the classification system away from mostly focusing on the terroir, viticulture, and quality of the wine itself and increasing emphasis on marketing, tourism, and the physical appearance of the properties. #firstworldproblems

As if Bordeaux hadn’t given the world enough joy with its world-class wines, they also gifted us with a decadent treat I discovered on this recent trip to Bordeaux – the Canelé. And, as if I needed to add to my already decadent repertoire of croissants, pan au chocolat, baguettes, crepes, and macarons!?! It’s a story of divine innovation…and intervention, some would say!

You see, historians generally agree that the pastry originated in various convents around Bordeaux as an unintended byproduct of winemakers using egg whites to clarify wine as it aged in barrels. To avoid waste, the egg yolks were often given to nuns to make food for poor children, and with the addition of flour, butter, milk, vanilla, and rum baked in a fluted copper mold…voila, the canelé was born!

Around 1985, a group of pâtissiers came together to protect the secret recipe, formalize standards for the cakes, and officially make them the property of Bordeaux. As a newly self-proclaimed connoisseur of canelé, I can tell you that a perfectly executed canelé is caramelized and crunchy on the outside with a tender custard-like center. C’est tres délicieux!!!

Lastly and because I’m wired this way, what did this fabulous vacation teach or remind me that we can draw parallels to for LeaderShifters?