You are here:
LeaderShift Articles 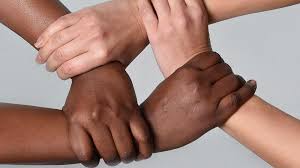 Companies’ executive leadership have likely already issued public statements about renewed commitment to racial justice. Maybe they have also pledged financial support to related causes. Those actions are great, but such one-time measures will not lead to sustainable and tangible racial equality in the workplace.

What can you do? We have a “yes, and” answer to that question. Yes, do all the impactful things suggested on the myriad lists circulating right now: educate yourself; reflect on your own conscious and unconscious biases; invite different points of view and experiences into decision-making; support minority-owned businesses; donate money and/or time to advocacy organizations; be an active sponsor for the careers of black colleagues; and many other ideas.

And we must move past the awkwardness of conversations about race to challenge questionable behaviors and comments when we see and hear them. In her 2014 TED Talk, “Color blind or color brave?”, Mellody Hobson, co-CEO of Chicago-based Ariel Investments, said, “I’ll be the first one to tell you, this subject matter [of race] can be hard, awkward, uncomfortable—but that’s kind of the point. So I think it’s time for us to be comfortable with the uncomfortable conversation about race…We cannot afford to be color blind. We have to be color brave.”

Being color brave in the workplace will surely involve difficult conversations on both individual and collective levels. Of critical importance is the giving and receiving of feedback. When done well, feedback changes perspectives, builds trust and connection, and leads to better futures for individuals, teams, and organizations. Here are five suggestions to help us more effectively communicate right now about race and racial injustice.

Welcoming empathetic inquiry from white and non-POC allies is a common message that many POC are conveying right now. The bravery to ask is more important than getting it exactly right. A straightforward conversation starter to check in with black colleagues in the current reality is “How do you need to be supported?” If they choose to engage in a discussion about race, let it flow naturally from there.

As with anything, there’s a continuum of experiences and reactions among our black colleagues. While some may be comfortable opening up, many are numb from dealing with subtle, systemic, and overt racism in corporate America. Some may enter every situation on the defensive, or watching for something to be said or misinterpreted. Be open to the real possibility that not everyone will want to talk, and don’t be offended or let that stop you from opening the door to discussions with others.

Remember one of Dr. Martin Luther King’s most well-known statements: “In the end, we will remember not the words of our enemies, but the silence of our friends.”

It’s all too common to justify or rationalize what we hear or to dismiss feedback altogether. Rather, let’s receive feedback gracefully and responsibly. Give feedback providers the benefit of the doubt. They have mustered the bravery to venture outside their comfort zones to give feedback that may challenge and expand your perspective. Keep the lines of communication open: listen respectfully, take it in, and say “thank you.” Then the feedback giver feels comfortable sharing perspectives, insights, and concerns about how your behavior or words affected them.

Feedback shared by black colleagues on systemic racism is not a personal attack. It’s an opportunity to listen empathetically and do your own follow-up learning about the history and ongoing impact of racism in America. Do not expect POC to educate you. In addition, as Amelia Ransom, senior director of engagement and diversity at Avalara, advised in a recent interview on HBR’s Anxious Achiever podcast, it’s also not the time to share an example that fits what the POC tells you. Instead, she recommends going deeper by asking if they’d mind sharing more.

Importantly, don’t get defensive if you don’t like or agree with what is said. Instead, ask clarifying questions to better understand context, impact, and perspective. And be open to the idea that even if you don’t agree entirely with the feedback, there is likely at least some small percentage—even two percent— upon which you can reflect and from which you can derive some benefit.

Instead of letting overt racism and subtle microaggressions slide, stand up bravely when you see them. Recognizing that every situation is different, let’s explore an example scenario for giving feedback on something unacceptable you saw or heard, such as a racist joke or a discriminatory act.

While preparation for a race-related conversation is good, don’t be  overly rehearsed or scripted. Be real and extemporaneous to stay connected and remember that trust is the runway on which just about any feedback can land.

The following are some suggestions for allowing audiences to see and experience authenticity, transparency, and vulnerability in your messaging.

Most organizations have too many feedback channels, making at least some of them veritable “ghost towns.” One-way use of a ghost town channel signals you’re not really listening and engaging, like a suggestion box that’s never checked. If a certain ghost town channel is the right one for current purposes, then use it but follow through with consistent use going forward. If it’s not, shut it down.

Find out from your stakeholders what feedback channels they prefer to use and co-design the terms of engagement, including tone and frequency. When giving feedback, we normally think in terms of finding the best time and place. However, for some issues there is no right time or place, except for right here and right now. Effective bidirectional feedback channels employed routinely will help build more open and trusting relationships in which issues surface before they escalate into bigger problems.

Shani Magosky, PCC is the founder of The LeaderShift Project™, author of The Better Boss Blueprint, and host of The LeaderShift Show podcast. She specializes in leadership development, organizational culture consulting, and team relationship/communication/performance coaching,

Craig Carroll, PhD is the founder and director of The Observatory on Corporate Reputation, lecturer on management in Rice University’s Jones Graduate School of Business, and Communications Institute leader for the Marketing and Communications Center at The Conference Board.